On February 13, 1996 a very special man passed away in his sleep. He was 80 years old and had lived a very productive and eventful life. Most important, he had been a dedicated husband to his wife of 58 years and was always there for his four children. Some would consider him unique because he was a Black man and many in society will argue that those kind of men don’t exist within the Black culture. We have been conditioned through literature, music and movies to view the Black man as an irresponsible, unfit husband and father. Too often when we think of the Black man, we have visions of Danny Glover’s character, Mister, in The Color Purple or the ingrate men in Terry McMillan’s Waiting to Exhale. Since McMillan’s publication and movie, there has been a flood of novels about the “Dawg” brothers. Even the Black man playing the role of a policeman was cast as a villain in Training Day. One would be led to believe that good Black men do not exist as husbands, fathers or men. 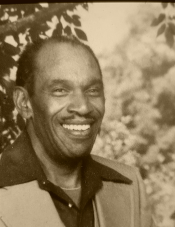 He married my mother when he was 22 and she only 17 and they spent their entire life together, and one can surmise at the time of his death they shared a love just as special and beautiful as could be expected.  After my father had passed on, I once asked my mother who she would like to have meet her on the other side. Without hesitation she gave me this look as if to say, “who do you think” and then said, “My husband.” Now that is a love that will transcend time and they will always be united as one. He made my mother feel very special and she did the same for him. He was an excellent husband.

Bill Williams took a very special interest in his children. His advice, at least to me, was always precise and correct. When considering the wisdom that my father shared with me while growing up, I often think of Mark Twain’s famous quote, “When I was a boy of 14, my father was so ignorant I could hardly stand to have the old man around. But when I got to be 21, I was astonished at how much he had learned in seven years.” My father was not a rich man but he was a wise man. When I reached the age when girls became very important in my life, he told me that, “your lover should also be your best friend.” After many disappointing relationships I finally got it right when I incorporated his advice and now have married for nearly 25 years. He also told me, “Always pay the IRS a little money and never get a large refund.” I learned that lesson the hard way, and now make sure I don’t get a large refund.

He provided his two boys and two girls with a foundation that led to our successes in life. We all learned the importance of a strong work ethic through his example. He would get up early in the morning and often walk to his job at the United States Post Office in Saginaw, Michigan so that my mother would have the car at her convenience during the day. After peddling mail in freezing weather (and anyone who has visited Saginaw in the winter knows just how cold it can get) all day, he came home, took a nap and then went to his second job as a waiter at the Saginaw Country Club. And he never complained in front of his children, because to complain would leave the impression that something might be wrong with work. He was an excellent father.

Bill Williams loved his family, was loyal to his friends and never complained about his life. He was a Black man who grew up when it was very difficult to be black in this country. But he never succumbed to the temptation to use discrimination and bigotry as an excuse for him not to achieve. He was the first Black man to work in the United States Post Office in Saginaw, Michigan. He became a union leader for the letter carriers when he transferred to Pasadena, California in 1957. He never told his children that they had to be twice as good in order to succeed. He simply told us to be the very best I could, and that worked well for me because to believe you have to be twice as good was to give credence to bigotry and prejudice. As his child, I never thought I had to be twice as good because it would admit that we begin from a position of inferiority.  That word did not exist in our household. No one can define your worth as a human being was his message to us. It is the same message that Black fathers over the century have shared with their children and continue to do so today.

Contrary to what many commentators proclaim, the Black father is not a replica of the past. He still exists and for that reason I extend a very heartfelt Happy Father’s Day greeting to all my fellow dad’s, who have been and are still the pillars that hold up our culture. And to my wonderful and fantastic Dad I say on behalf of my siblings and me.

2 thoughts on “A Father’s Day Salute”