Seven years ago I began my research into the Tulsa Riot of 1921. The result of that study was the release of Fires of Greenwood, a novel that chronicles the barbarous attack on a prosperous Black community, leading to the brutal killings of over three hundred men, women and children, and the destruction of thirty four blocks of successful businesses and beautiful homes. As we have witnessed throughout our turbulent history in this country, the official reason given for the massacre was the alleged attack of a young white girl, Sarah Page, by Dick Rowland, a nineteen-year-old Black bootblack. However, the actual facts of what happened in the Drexel building elevator on May 30, 1921 between those two, do not support the alleged reason for the massacre. I was, therefore, determined to write a novel depicting the real truth behind the slaughter of three hundred Black Americans, at the hands of a white mob.

Besides the mysterious relationship between the Dick and Sarah, what I found most compelling was discovering just how prosperous Black Americans were in their segregated community known as Greenwood. In fact, when Booker T. Washington past through the city on his way to speak in Boley, Oklahoma in 1905, he was so impressed with the number of successful businesses in the Greenwood corridor, he coined the term “Negro Wall Street” (once the term Negro was no longer acceptable, it was changed to “Black Wall Street”) as the best way to describe the area. Years later, in March 1921, Dr. W.E.B. Du Bois was just as impressed with the number of successful businesses, when he visited the community and delivered a speech at the Dreamland Movie Theater, owned and operated by Black entrepreneurs John and Loula Williams.

My research also brought to life the Gurley and Stradford Hotels, places of lodging for Black visitors to the city. Dr. Du Bois actually stayed at the Gurley Hotel during his visit there. However, it was not considered the better of the two; the Stradford was the finest Black owned hotel in the country, and easily matched the white hotels in Tulsa for convenience, luxury and comfort. John Stradford and O. W. Gurley were two of the richest Blacks in Tulsa. Both men had become millionaires before all was lost on that dreadful day in 1921.

In addition to the Gurley and Stradford, there were William Anderson’s Jewelry Store, Henry Lilly’s Upholstery Shop, A. S. Newkirk’s Photography Studio, Elliott and Hooker’s Clothing Emporium, H. L. Byar’s Tailor Shop, Hope Watson’s Cleaners and Lilly Johnson’s Liberty Café that served home cooked meals at all hours, while nearby Little Café is where people lined up waiting for their specialty chicken or smothered steak with rice and brown gravy. And there was the famous Little Rose Beauty Shop, run by the matriarch of the community Mabel Little.

The area possessed fifteen Black physicians and Dr. Andrew Jackson was recognized by the prestigious Mayo Clinic as one of the finest doctors in the country. The community also built its own hospital and the magnificently structure Mt. Zion Baptist Church, known to rival any other church in Tulsa or the entire state of Oklahoma. All this came crashing down, as the invaders dropped turpentine soaked firebombs that lit up the entire community and torched many unsuspected men, women, and children.

The tragedy that befell the prosperous Greenwood district, as well as other similar communities in this country, was that Black Americans were too successful, and a jealous and envious white community was determined to eradicate those businesses. That egregious attack on innocent citizens was not about a Black man accosting a white girl. It was about Black men and women who had bought into the Booker T. Washington position that hard work and a commitment to the American dream of capitalism would pay off handsomely. O.W. Gurley, a strong advocate of the accommodationist approach, found out just how much whites respected successful businessmen and women of the darker hue when they shot his wife and burned down his hotel.

Tulsa clearly points out that the only acceptable behavior whites would condone was for Blacks to be passive and subservient to them. “Uppity” became synonymous with Black men and women stepping out of the role as servants and field hands. However, the positive message that shines through the pages of Fires is that Blacks in Tulsa refused to condescend to the arrogance of the majority, and were willing to fight and die rather than allow an innocent Black boy to be lynched by the mob. Finally, this writer portrays the relationship between Dick and Sarah in a manner not pursued by the many other researchers, who have studied the causes of the riot. The portrayal of their involvement makes for an interesting and entertaining read, which should always be the goal of the novelist.

This novel re-creates the events that led to this slaughter and brings to life true heroes who stood up to the evil and fought back. It is imperative that Black writers begin to “tell our story our way,” and that is what I have done in the pages of Fires.  Eminent scholar and Harvard Law Professor Charles Ogletree noted that, “Frederick Williams has taken the 1921 Tulsa Riot to new heights and reminds us all that we cannot forget the African American community that battled to protect their dignity and respect. We will never forget what happened to the members of “Black Wall Street’ and will make sure that generations of people will forever remember the hard working men and women who fought to preserve their dignity.”

Prosperity Publications, the publisher has contracted to convert this work into a screenplay and will pursue producing a movie that will be as compelling as recent movies such as Selma, The Butler and Twelve Years A Slave. In the meantime I invite you to purchase the novel through Amazon or communicate with the company at www.prosperitypublications.com., or leave a message here on my writer’s blog.  A novel is always more comprehensive and thorough than the movie and that will be true with Fires. 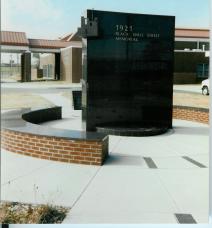 You can also visit the website of the Greenwood Cultural Center at www.greenwoodculturalcenter.com or the John Hope Franklin Reconciliation Park at www.jhfcenter.org both located on the grounds of the tragic events that happened on June 1, 1921, 95 years ago.