Since I first did this post last year my Mother, Willa Mae Williams, has seen another Christmas and is a young 95 years old. My sisters and I feel the blessing from God that she is still with us. For that reason I have decided to share these words of praise I wrote last year, not only for my Mother but also for all the mothers, who have made us a better people. So here it goes once again, my Christmas tribute from last year and still applicable in 2015.

Willa Mae Williams just had a hip replacement on this past Monday and by Friday she was up and walking. What makes this worth writing about is that Willa Mae is 94 years old, and she has no plans of slowing down once she completes her rehabilitation.

Born in 1920 in a small southern town in Arkansas, Willa Mae was part of that great migration of Black Americans who left the South during the early part of the Twentieth Century and moved North, seeking better opportunities and escaping from the ugliest aspect of American racism. She arrived in Saginaw, Michigan in 1933 and by 1937 had married Bill Williams, who was five years older. Their union was a synthesis of the traditional southern culture with the emerging northern culture. She was 17 when she married her husband and 75 when he passed away. Willa Mae dedicated her entire life to her husband and to raising her family.

Willa Mae’s mother, Lucy Perry, at the age of 39 lost her husband to tuberculosis one month before giving birth to her youngest son. At the time she had two young sons, one teenage daughter and a baby still at home.

Despite the tremendous hardships she confronted, Ms. Lucy raised her sons and daughter by herself.

Nina Williams, Willa Mae’s mother-in-law, married George Williams in 1912 and stayed married to him until his death in 1962. She gave birth to five boys and three girls and dedicated her life to raising her family, also.

Willa Mae Williams, Lucy Perry and Nina Williams are no different than millions of beautiful Black women who, over the decades, have dedicated their lives to the family. They have been the glue that has held our culture together. These particular three Black women are the ones that took time to raise my brother, two sisters and me. I am sure that all my readers have similar mothers and grandmothers that assisted them in the navigation through this life. Oftentimes their biggest fears would be that their children would face a hostile environment and respond to it in a negative way. And that negativity could get them locked up or killed.

The burden of mediating with their children to keep them out of harm’s way, has weighed heavily on the Black mother from slavery to the present day. Often times slave mothers would prefer to whip their children than to have the overseer or oppressor do it. Leon Litwack in his historical work, Trouble In Mind, writes that, “During slavery parents were helpless to protect their children from a whipping and they were sometimes compelled to inflict the punishment themselves in the presence of whites to teach the disobedient child a lesson-and to avert even harsher punishment if meted out by the overseer or owner.” (Leon Litwack, Trouble In Mind, Vintage Books, New York, 1999, pg. 25)

After Emancipation, the problems increased because a generation of young Blacks born into freedom never accepted the rules of segregation, and often rebelled against them. Black mothers again took on the burden of explaining to their young why they could not talk back to a white person or fight with a white boy, even if they were attacked. This often caused a great deal of conflict between the mothers and their children.

But through it all, the Black mother never lost her grace and dignity. She brought us up the rough side of the mountain and made it possible for her children to prosper and succeed in life, despite all the inequalities of this society. For that reason, I suggest that during this season of giving, we all give the greatest gift possible to our mothers, grandmothers and in some cases great grandmothers, and that is the gift of love. That would mean so much to them, who have given so much for us. Despite all the hardships, suffering and pain, if they can only hear four ingratiating words from their children, it will make all of it worth while and those words are, “I LOVE YOU, MOTHER.'”

MERRY CHRISTMAS FROM THE WRITER FRED TO ALL YOU BEAUTIFUL READERS!!!!!!!!!!

On April 23, 1951, Barbara Johns, a sixteen year old girl who was the niece of the firebrand minister, Vernon Johns, summoned all 450 Black students attending R.R. Moten High School in Farmville, Virginia to an assembly in the school auditorium. Against the protest of the faculty, she stood in front of the student body and rattled off a series of complaints about the condition of their school. When the faculty attempted to remove her from the stage, she ordered them out of the auditorium.  Barbara recognized the futility to get adults to do what they should, so she was determined not to let them stop the other students and her from eradicating the evil of racism.

She told her fellow students that Plessy v. Ferguson was nonsense and the white apartheid system would never comply with the Supreme Court decision that separate must be equal. As early as 1951, it was the youth that made it known they would no longer attend classes in tarpaper shacks, having to wear coats in the winter to stay warm and dodge the rain in the spring that freely flowed from the roof down into the building. They objected to riding in buses that often broke down before arriving at their school, always a long distance from their homes. Barbara further told the students they should be outraged that their history teacher had to drive the bus and had to gather wood and start the fire inside the school in order to keep them warm.

Young Barbara Johns shouted loudly for all to hear that the students demanded their rights as Americans to equal treatment. Since the adults couldn’t get the job done, then the young people would. The white school board had regularly rebuffed the demands of the adults to improve the conditions in the school, and reneged on a promise to build a new high school.  The adults appeared impotent in their negotiations with the whites, so Barbara and her fellow students decided they would strike. They marched out of the school building and downtown, prepared for a confrontation with the power structure.

After their demands were denied, the students then appealed to the National Association for the Advancement of Colored People (NAACP) for legal assistance. A week later when the officials from the NAACP arrived in Farmville, under the assumption that it was the adults who had made the request, they were surprised when they walked into a room full of students.  The NAACP lawyers informed Barbara and the students that their strike might be illegal, and they could be arrested. Barbara boldly retorted there was too many of them for the small jail in their town. But if arrested, they were willing to be incarcerated in defense of their God given rights and liberties. Eventually, the NAACP agreed to argue their case and ultimately it became a part of the larger lawsuit, Brown v. Board of Education that led to the famous 1954 United States Supreme Court decision ruling separate was not equal, and that schools should desegregate throughout the south.

Sixty-four years later another young Black student, over a thousand miles away from Virginia has taken on the same kind of racism that Barbara confronted. It has been over a month ago that I first wrote about the courageous Kayla Wilson, a student at Robert E. Lee High School in San Antonio, Texas. She attends the magnet school for the arts and must go there if she wants to pursue her love for creative writing. In an earlier post, I shared with the readers her outstanding poem titled “Ebony.” 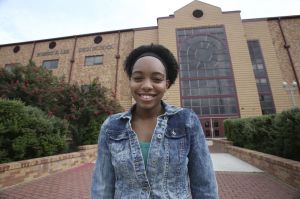 Kayla’s struggle is with the name of her school. She finds it incomprehensible that the North East Independent School District will not consider her request to change the name from Robert E. Lee.  I have, in the past, written an article for the San Antonio Express News expressing my unwavering support for Kayla’s position. I outlined four basic reasons for the need to change the name.

Kayla Wilson is our own modern day Barbara Johns. Just like Barbara, Kayla has challenged the school board with very little support from the leaders of the community or the civil rights organizations, with the exception of former Mayor Julian Castro who was the first to call for the name change. But just like Barbara, Kayla now needs the legal, political and moral support of her community, and all communities interested in improving the racial climate in this country. The elected officials of the city, the NAACP, the national and local leaders, even the leaders of the Million Man March, should show up in San Antonio and lock arms with Kayla and let her know she has their support. Nothing less than a mass protest is going to force a change in the status at Robert E. Lee High School. This is a case with strong national implications for the future. If the national leaders of the Black community can ask us to boycott Black Friday in November, they can also come to the aid of a seventeen-year-old high school student who is doing the work that the adults throughout the country should be doing.