Over the past several months, I have taken on the difficult task of writing a screen play. It is difficult for me because all my training and writing has been novels and the two genres are much different. When I reach a point of frustration, as I often do, I walk away from the computer, go to the television and tune into my additional frustration, and that is watching August Wilson’s Pulitzer Prize winning play, Fences as a movie. My frustration is with the main character, Troy, played by Denzel Washington (whom I feel did an excellent portrayal of the character). He is the reason I keep going back to this movie every time I want a break from my primary frustration. The problem is I really want to like Troy because he is a Black man as I am, and even though his struggles with this country occur years earlier than mine, they are similar. But that is where our commonality ends.

I am not sure exactly what Wilson was doing with this character, or if he even cared how we the viewer would feel about Troy. Before deciding to write about this very complicated character, I read a lot of reviews by critics and the most important people of all, those who also saw the movie. One fact that is undeniable, Troy causes an emotional response in people and maybe that was Wilson’s goal. If so, he succeeded. But then what type of emotion did the viewer get, and is that important? I feel that it is! And just as important is what kind of perception or image did he create in the minds of young Black boys and men who saw the movie? 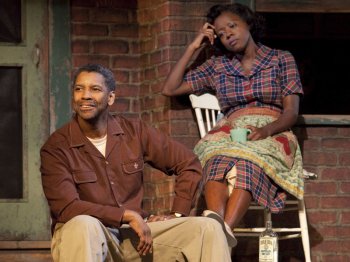 I am not sure which of the two frustrations I will manage to overcome, attempting to master the art of writing a screen script or finding some value and worth as a man in Troy. With any luck it will be the first one because, honestly, I don’t think I want to conquer the second one. Because if I do, I will find some value in a man who cheats on his wife, beats his son, and lacks the ability to know that he has made their lives miserable because of his own weaknesses and insecurities.

In my attempt to assess what August Wilson was trying to accomplish by creating this very dysfunctional family, I must ask the question should fiction imitate life or should fiction influence life to make it better? The great Peruvian Nobel Prize winning author, Mario Vargas Llosa, in his creative writing work book, Letters to the Young Novelist, has written that the novelist looks at the world the way it is and then dreams of how it can be better, and that is how he or she should write. He also advises the young novelist that fiction is the window to view the soul of a people. Plays and films also fit into this category. Is Troy’s world what we aspire for our young, and when future generations view that movie will that be the impression they have of us back in the Twentieth and early years of the Twenty-first Centuries. As writers and hopefully, dreamers, do we owe them something much better than the image of Troy? If we don’t, why are we writing?

No doubt August Wilson was a very good playwright, but I also believe the story he tells in Fences is one that most Black people have lived and don’t necessarily need to be reminded of in plays and movies. We deserve something much more enlightening and therefore empowering as a people.