At the very moment I heard the announcement that Dick Gregory had died, I immediately conjured in my mind a poem, “When Great Trees Fall,” by Maya Angelou. Specifically, I thought of the lines that read,

And when great souls die after a period peace blooms slowly and always irregularly. Spaces fill with a kind of soothing electric vibration. Our senses, restored, never to be the same, whisper to us. They existed. They existed. We can be, Be one. Be better. For they existed.

Because Richard Claxton Gregory existed, we all are better for what he taught us over his long historic career as a civil rights icon, social theorist and Socratic Gadfly, who challenged people and events when others dared not to do so.

I had the extreme pleasure of meeting Dick Gregory as a young man in Pasadena, California involved in the social revolution of the 1960’s. He came to the city to address the NAACP and I was one of the host for his stay. I recall that instead of going out to a fancy restaurant, Mr. Gregory wanted a home cook meal that included a pot of chitterlings (that was before he had made the conversion in his eating habits). I remember he advised us young activists that we must make a commitment and once that was done, let nothing stand in our way to achieve our goal. He insisted that our goal should in some way benefit our people, as we struggled to fight off the awful system of bigotry and segregation that was choking the life right out of us. 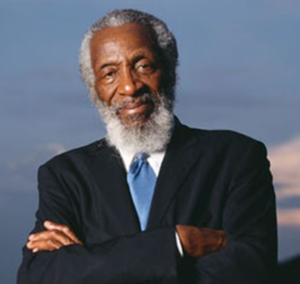 This great hero of the Black race lived by his beliefs. He gave up a very potentially lucrative career as a comedian, in order to get involved in the protest movement in the South. Over the years, as I observed Bill Cosby’s career catapult to the top with I Spy and The Bill Cosby Show, I thought of Mr. Gregory’s sacrifice for the cause, and he rightfully could have taken that same route, but refused to play the role in order to satisfy the guilty conscience of white America. He chose to prick that conscience whenever the occasion arose, instead of pacifying the men who ran the system that oppressed his people.

I recall that while teaching a Black Social Movements Course at the Monterey Peninsula College in Monterey, California while attending the Monterey Institute of Foreign Studies and Black Politics at Indiana University while working on my Doctorate Degree, there was one recording I always played for my classes. It was a recorded tape of a speech that Mr. Gregory made to students right after the Kent States shooting in 1970. He was extremely critical of the Vietnam War and explained to the white students, that because they dared to challenge the power of the national government they were the new targets for abuse. According to Mr. Gregory they had become the new n___rs. He also talked of the arrogance of a race of people, who claim that they discovered a country that was already occupied. And just like their assumption of ownership over the land, they made the erroneous claim over the bodies of more than four million African Americans.

I again had the opportunity to communicate with Mr. Gregory in August 1978, when on Women’s Equality Day, he marched with one-hundred thousand women campaigning for a ratification deadline extension for the Equal Rights Amendment. Senator Birch Bayh (D. Indiana) was one of the primary sponsors of the amendment and as his Legislative Aide, I was involved. Along with Gloria Steinem and other leading proponents of the amendment, Mr. Gregory met with the Senator to discuss strategy. Ultimately the amendment failed to get ratified in the states. But Dick Gregory remained a strong proponent of equal rights for all people.

Dick Gregory used the analogy of a turtle as a comparison of the kind of individual he was and felt all others should emulate. He explained that a turtle was soft on the inside, hard on the outside and willing to stick its neck out. That is precisely how this great man lived his life and as a result of his 84 years we are all better off because he existed.