Black America has now reached the point of crisis regarding its existence as a legitimate cultural entity in this country. It is under attack from many different media outlets.  Rap music, much of the street literature, and premiere television shows and movies are detrimental to a positive reflection on the African American culture. Nickie Minaj’s music such as “Feeling Myself,” “Stupid Hoe Lyrics,” “Boss Ass Bitch Lyrics,” and “Lookin’ Ass Nigga Lyrics,” and hood novels such as The Dopeman’s Wife, Last Bitch Standing, A Hustler’s Wife, Whore, Black and Ugly, Black and Ugly As Ever and Crack Head II: Laci’s Revenge and television shows like Empire and soon to be released movie about the rap group NWA, do not represent good art but, to the contrary, effective vulgarity. While these writers and entertainers gain a great deal of notoriety and money, they distort the image of a culture that has taken centuries to build. That is why I have labeled our Black librarians as Gatekeepers of the African American Culture. And that is why I traveled to St. Louis, Missouri last week, along with D. L. Grant, Branch Manager of the Carver Library and Anji Hall-Johnson, librarian at S. J. Davis Middle School, both in San Antonio, to participate in a short but effective presentation on the role of librarians as gatekeepers to our culture.

Please do not misread the position I am advocating. The individuals who support  the songs and novels as well as television programs I mentioned, have a legitimate right to their position as articulated through those works.  But it is imperative that they do not drown out others that articulate a much more positive message about our culture, and that is the point where I believe our librarians become important. They have a tremendous responsibility to assure that the positive images of African Americans, as created by artists from the past, still endure. Their role as gatekeepers evolved from the evolution of a cultural identity, as projected through the works of the Renaissance artists gathering at the 135th Street Harlem Branch of the New York Public Library, in the 1920’s. Their goal was to elaborate on who we were as a very distinct people in this country. It began with the great migration of Blacks out of the South and into the urban centers in the North.

The Black migration out of the South became more than simply a geographical relocation, but also a transformational change from a rural folk to an industrialized, urbanized people. Richard Wright in his introduction to Horace Cayton and St. Clair Drake’s Black Metropolis in 1945, described that transformation as follows: “Their kinship with the soil altered, men (and women) became atoms crowding great industrialized cities bewildered as to their duties and meaning…The meaning of reality, emotion, experience, action, and God assumed the guise of teasing questions.”

What did it all mean for them? The rules and structures that dictated their lives in the South, no longer applied to living in the North. Something new would now direct them and how that something new would be defined, is what they had to discover. It was the beginning of exploring who they were, why they were in this country, and what lie ahead for them. And most important, they now had the freedom to explore those questions.

Many of these conversations took place at the Harlem Library under the leadership of Regina Anderson and her evening volunteers like Gwendolyn Bennett, Jesse Fausett and Ethel Nance, women who took pride in their race and its culture. They hosted poetry readings, book discussions and general literary activities related to the questions that Black Americans felt free to articulate in the North, but could not do in the South at that time in history. Paul Laurence Dunbar’s famous poem, “We Wear the Masks,” told of the problem artists confronted while in the South.

When poets like Langston Hughes and Countee Cullen, novelists like Rudolph Fisher, Jesse Fausett, Claude McKay and Walter White and painters like Aaron Douglass all met at the 135th Street Library and addressed the issues confronting the Black man and woman in this country, then wrote and painted about those same issues, they were effectively laying the foundation for an identifiable culture. In the 1920’s Harlem, the 135th Street Library became the prototype for libraries located in Black communities throughout the country.

The Black librarians today have inherited the responsibility to continue the great work of Regina Anderson and the other ladies who assisted her in the pursuit of excellence in art and culture. In 1970, Dr. E. J. Josey understood that responsibility when he took the lead in organizing the Black Caucus of the American Library Association. Today, men like Sekou Molefi Baako and D. L. Grant, and women like Anji Hall Johnson are carrying that responsibility forward into this century. As an advocate for my local library here in San Antonio, I plan to continue supporting and sponsoring those events that perpetuate a positive reflection, on what those great artistic progenitors began back in the 1920’s in Harlem at the 135th Street Library. 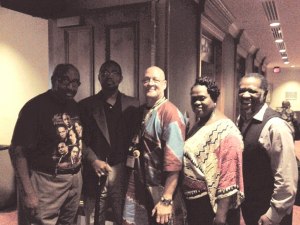