She brought me in this world.” 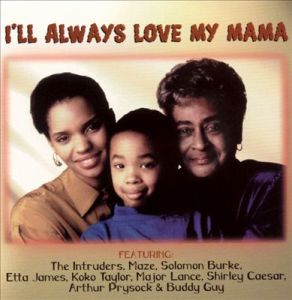 The Intruders probably had no idea when they recorded “I’ll Always Love My Mama” back in 1973, that it would have such a universal outreach over generations and decades. What they were able to express through song, was that “Mama” has been the pillar of the African American family from the first time our ancestors landed on these shores, through slavery, through apartheid and right up to last week when that mother walked on the scene in Baltimore, and chased her son home from the mob. She was doing nothing more than what “Mama” has done for centuries in this country. In fact, there has never been a time or period that the Black mother did not have to worry about her children.

During slavery they worried that their babies would be sold right from under them because, as the slave owners proudly proclaimed, the children were their property and that took precedence over any notion of motherhood. Often these same owners would rape our women and force them to carry to birth, a child conceived through an act of violence. But still these mothers loved their children; a strong indication as to just how special they were as “Mama.”

Post Reconstruction years were also turbulent times for Black mothers. They understood the rules of apartheid; but often, young children did not. Every day and every hour their children went out into the rigid world of white racism, they worried if they would safely return home. Black mothers and, in some instances when fathers were around, assumed an awesome responsibility. They needed, as Ralph Ellison would observe, “to adjust the child to the Southern milieu…to protect him/(her) from those unknown forces within himself/(herself) which might urge (them) to reach out for that social and human equality which the white South says (they) cannot have.” (Ralph Ellison, Shadow and Act, New York 1964).

The responsibility that “Mama” assumed during those terrible years was not only for the safety of her children but also to feed and clothe them, and put a roof over their head. “Mama” did all kinds of jobs to make that happen. She scrubbed floors, washed and ironed clothes, cleaned homes and cooked meals as domestics so that her children could eat. Often “Mama” would have to bring home leftover food for the children.  Writing about his childhood in New Orleans, Louis Armstrong said of his mother: “When Mayann took up domestic labor, she worked for a white family on Canal Street. That job probably gave her ‘toting’ privileges, allowing her to bring food and perhaps clothing home to her children, a common practice in the South.” (Carol Marks and Diana Edkins, The Power and Pride, Stylemakers and Rulebreakers of the Harlem Renaissance, Crown Publishing, New York, 1999)

The plight of “Mama” today, is not quite as drastic as it was during the turbulent years of apartheid. But the struggle continues for these keepers and protectors of the race. The threat of retaliation for perceived poor behavior from a previously racist oriented society has waned, but the threat that young Black boys face everyday from the established law enforcers in their community, still exists. In that light, the struggle continues.

The beautiful Black “Mama” who smacked her son right in front of the entire world that troubled day in Baltimore, expressed generations of frustrations she and her fellow sisters of the race have encountered for much too long. But through it all, one constant remained; “Mama” loves her children. Despite the hardships over the centuries, she stayed steadfast and diligent, dedicated to her family. And for all the pain she has endured; the worry, the fear, and the love, “Mamas” in every part of this country share the same feelings as the great gospel singer Shirley Caesar when she sang, “No Charge.”