For Black America, the election of Donald Trump might become a positive over the next four years. I know, many of you might think that this writer has become delusional. Let me try to explain why I would make such an assertion. I believe a certain degree of apathy has taken hold, and set in on most Black Americans after the election of Barack Obama. We became rather content, after all, we had a Black President. It couldn’t get any better than that. If you couple that with the fact that many of us are living a very comfortable middle class life, then our condition wasn’t so bad after all. We didn’t need another Dr. Martin Luther King, Jr. to lead us to the promise land. We were already there. 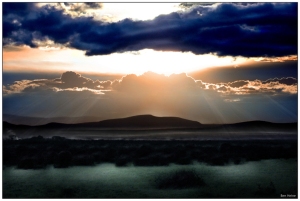 But while we were playing golf on Saturday and attending one of our prosperity churches, listening to our ministers who drove up in Mercedes or Jaguars on Sunday, crime in our communities was escalating, police were using our young as target practice, and the job market was not friendly to our men and women seeking employment. And for eight years, the first Black President was constantly under attack by those detractors determined to make his presidency a failure, and by the way Trump led them. We saw this coming but did nothing to prepare. We just kept playing our golf, watching our games on television, and totally ignoring what was happening all around us.

But we now know that the lackadaisical attitudes of the past can no longer continue. We all must make a commitment to use our talents in ways that can improve the conditions of our brothers and sisters whose struggles are going to get real tense over the next four years. We all have a lot of work to do as we move forward into the Trump years in the White House. And even though Charles Dutton’s final speech in Spike Lee’s movie, Get on the Bus was geared toward Black men, it is applicable to the entire race. For that reason, I am compelled to share it with those of you who never saw the movie and the others that gave very little importance to what he said.

In the very last scene in the movie, Dutton addresses all the brothers who have made the trip to Washington, D.C. but did not participate in the Million Man March because one of the characters, Ozzie Davis, suffered a heart attack just before the march and many of the men chose to remain with him at the hospital. But once they do arrive at the Lincoln Monument, it is very late and the men are depressed. That is when Dutton walks toward the back of the bus, and delivers the most important and poignant message of the entire movie. And one that all of us, men and women, can use as a measurement of where we go from here. Dutton tells the men: 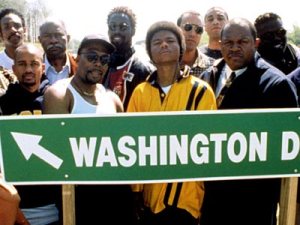 “We’re here because God Almighty wanted us here. And he doesn’t care so much about what you already done. God asks what you going to do now…The real march ain’t even started yet. This was only the prelim, the warm up….The real Million Man March won’t start until we Black men take charge of our own lives, and start dealing with crime, drugs, and guns and gangs and children having children and children killing children all across this country. If you all are ready to quit your apathetic and unsympathetic ways as I am and take back control of the Black community. If you’re ready to stop being the boys and be the men that our wives, and our mothers and our children are waiting for and stand up against all the evils lined up against the Black man…and just say we’re tired of this shit and we ain’t going to take it anymore. If you’re ready to do that, then we got work to do. We’ve got a lot of work to do.”

For the next four years, the intensity of that work is going to double. Despite his promise to be President for all the people, Trump’s early appointments signal that once again he is not being truthful, at least not with us. But Black America has risen to this challenge in the past. We have precedent on our side. We know how to survive under the roughest of conditions. Men and women such as Frederick Douglass, Dr. W. E. B. Du Bois, Marcus Garvey, Malcolm X, Ida B. Wells-Barnett, Ella Baker, Fannie Lou Hamer, Bayard Rustin, and Dr. Martin Luther King, Jr. did not even consider the possibility of giving up. These great leaders struggled and survived and we must pick up their mantle of commitment and continue the work so that four years from now, when Trump is defeated, we will be stronger and wiser as a people. 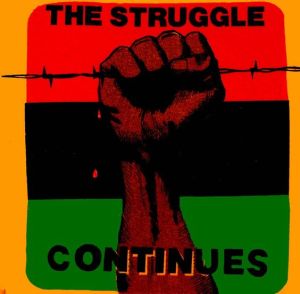 On Monday of last week, millions of men, women and children celebrated the birthday of Dr. Martin Luther King, Jr. in church ceremonies, plays, marches and speeches throughout this country and all over the world. All of these celebrations were primarily based on the dream that Dr. King expounded during his 1963 speech in front of the Lincoln Monument. Here in San Antonio, the city has even adopted a “Dream Week” that runs from January 11 to the day after the King March. It can easily be surmised that the Dream has taken the front and center position in the entire Civil Rights Movement of the twenty-first century. 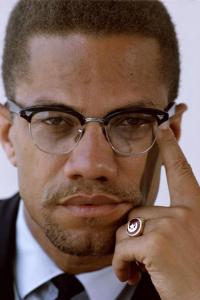 However nine months after the famous King speech, Malcolm X challenged the premise of the Dream in a speech delivered at the University of Ghana. He exclaimed, “So if someone else from America comes to you to speak, they’re probably speaking as Americans and they speak as people who see America through the eyes of an American. And usually those types of persons refer to America as the American Dream. But for twenty-million of us of African descent, it is not an American dream, it is an American nightmare.”

From a historical perspective we had two Black leaders viewing the plight of their people from different lenses. These two points of view still exist today and speak to the division within the race. No doubt for many Black Americans, King’s dream has become a reality and they function well within an integrated, capitalist system. But for far too many of the very people that King set out to help prosper, they still remained trapped right in the middle of Malcolm’s nightmare.

You need only go to any large city in this country and the pattern of economic deprivation is the same. There are no jobs for the youth and only minimal jobs for an unacceptable percentage of adults. While the national unemployment rate had fallen in 2015 to a low 5%, the rate for Blacks still hovers above 10%. And the figures for young Blacks between the ages of 16 and 19 are astounding. Over the years it has been 393% of the national average. In 2013, the figure was 36% while the national average was 7.3%. When measuring these statistics against the dream or the nightmare no doubt the latter prevails.

An even more devastating statistic is the number of young Blacks who are the victims of violence. In the years 2008 and 2009, 5,740 children and teens died from gunfire. Of that number 3,892 were homicide victims and 2,320 were Blacks. Again, measuring these statistics against the dream or the nightmare the answer as to which one prevails is quite evident.

We are now confronted with the deplorable situation in Flint, Michigan where our children and adults have been drinking, washing and bathing in water that has been contaminated with lead. These children, as well as adults, will suffer the consequences of this evidently deliberate refusal to cure the problem by the elected officials in the state of Michigan, for the rest of their life. If one were to ask the men, women and children in Flint if they view their condition as part of a dream or nightmare, there is no question how they would respond. 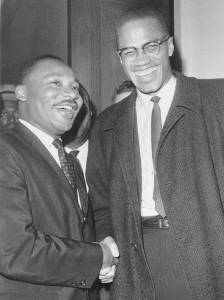 I am not trying to make an empirical argument in support of Malcolm’s nightmare analogy but only to point out that we have a long ways to go before the dream is realized, for not only a few, but everyone. At some point we must stop placing the emphasis on the Dream aspect of Dr. King’s speech but more on the un-cashed check that was the real message he delivered in 1963. When his speech is examined from that perspective it becomes quite compatible with Malcolm’s nightmare and unites the two leaders in their outlook on the condition of Blacks in this country.

As we begin the second half of the second decade of the twenty-first century, those Black Americans who have achieved the dream must pause in their savoring of success and realize that we still have a great deal of work before us. They cannot afford to be content until no Black man, woman or child is left behind. And that simply means that the unemployment rate among Blacks is equivalent to the national average, the killing of our youth by the police and from gang warfare ends, and that Black Americans are given the same opportunities to succeed in a country that claims to offer equality to all.