In the year 1890, Mississippi convened a special convention for the purpose of modifying that state’s constitution. Their goal was to exclude the Black population from voting in state elections, through systematic patterns of disenfranchisement. Even though African Americans comprised a majority in the state’s population, only one delegate at the convention was Black. Isaiah Montgomery was a very prosperous businessman and was instrumental in the establishment of Mount Bayou, a Black town in the Delta. He was also an accommodationist on issues of equality. Whites had come to regard him as a “safe” and “sensible” Black leader, no doubt explaining why the dominant white faction at the convention chose to seat him over his white rival. (Leon Litwack, Trouble In Mind, New York: Vintage Books Edition, August 1999, pg. 353)

Montgomery understood what his role was to be. As a Black man, he would lend credibility to the blatant, undemocratic removal of all Blacks from the voting rolls in the state. He carried out his assignment quite well. Speaking before the assembly, he was willing to sacrifice voting rights—“a fearful sacrifice laid upon the burning alter of liberty”—in order to end racial conflict, and “to bridge a chasm that has been widening and deepening for a generation.”  (Ibid, pg. 353) In order to bring peace to the South, Montgomery was willing to agree that Blacks should be forced to pass a literacy test and own property before they could vote. He rightfully knew these requirements would exclude his people from the polls. It was the ultimate concession to white supremacy.

This week, Isaiah Montgomery was reincarnated in the persons of Ron Christie, Mike Meyers and Deneen Borelli. These three Blacks appeared on the Sean Hannity Show for the sole purpose of supporting his vicious and blatant attack on First Lady Michelle Obama’s speech to the graduating class at Tuskegee University. 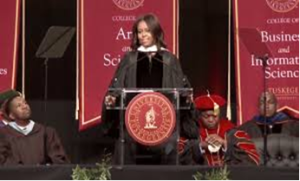 Hannity has become FOX Cable News’ point man in the station’s attack against President Barack Obama and their apologists for the escalating police use of force against young Blacks. Just like Montgomery understood what his role was to be at the convention back in 1890, Christie, Meyers and Borellie understand their role with FOX. They are there to make Hannity legitimate.

FOX has a procedure. Hannity will throw the bait to the attackers and they will take it from there. In this particular case, he asked, “Why is she (Michelle Obama) so angry?” The first to respond was Borellie who accused the First Lady of playing the race card and race baiting. Then it was Meyer’s turn and he made gestures and weird sounds as if to imitate the First Lady and the President. Finally, Christie called on his White House experience to tell us that the speech was vetted by the political operatives, and therefore approved by the President. This has been FOX’s method of attack for the past six years. Hannity usually has his number one “yes boy” Jesse Lee Peterson, to do his dirty work. However, using others instead serves as proof that he has additional Black support in his attacks of the President and the First Lady.

However, just like Montgomery really did not represent the sentiments of African Americans when he told that racist crowd in Mississippi that it was okay to take their vote away, these three apologists for Hannity in no way represent Black opinion in this country. But if it makes that crowd over at FOX feel good, go for it.

3 thoughts on “An Important Historical Fact”